Although this year's calendar has seen Belgian beers originating in Scotland and West Coast IPAs brewed in Spain, today's beer is remarkably focused in comparison, geographically speaking: an Imperial Baltic Porter brewed by Pohjala, in Estonia. 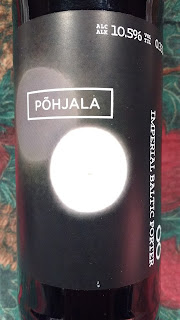 Estonia is one of the three Baltic states, along with Lithuania and Latvia, which embraced porters from England back in the day. They brewed them in an amped up fashion, however, similar to Russian Imperial Stouts, with even toastier malts and higher alcohol content than the British originators. This style was also popular in Finland, Poland and Russia, but virtually disappeared in the West during the Cold War.

Dark Imperials like this are my preferred style of beer, especially in the winter, when the robust malt character and the warmth of the big abv (10.5% in tonight's offering!) can go a long way in dispersing the winter blues and warming one's innards.

Pohjala's IBP pours a deep rich brown, almost black, reminiscent of India ink. There is very little carbonation, so almost no head to speak of, despite a vigorous pour. A moment later, a thin, perfunctory layer of fine, caramel-coloured foam appears in an almost obligatory fashion, as if to say, 'Yeah,right, you came here for the head, just like those guys who claim to read Playboy for the articles.' 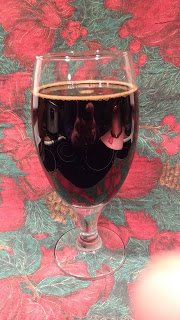 The high abv permeates the aromas emanating from the glass, but also carry a deep richness. Hints of strong coffee, bitter chocolate and dark fruits, like blackcurrants, add to the bouquet.

The richness continues as I take my first mouthful, toasted malts, just shy of burnt, bring a biscuity taste offset by bitter coffee notes. It finishes sweetly (10.5% abv!) and with an almost vanilla-like quality and smoothness.

Pohjala's Imperial Baltic Porter is a brilliant rendition of the style, and I am sure it would have shown even more complexities as it warmed, if I had only allowed it to. 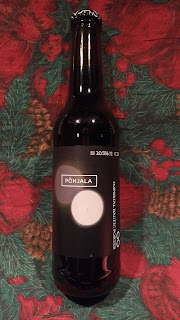 Not really a beer to accompany a meal, but an excellent way to finish one. I have a clear picture in my mind of a dinner with friends, capped off by a glass of this beer for dessert, paired perhaps with espresso beans covered in dark chocolate, in hopes of extending the evening into the wee hours...

A definite contender for favourite beer in this calendar, and I will definitely be searching it out after the holidays!
Posted by Stephen Fitzpatrick at 10:00 PM