The Victoria Cross may be the most storied decoration for military gallantry in the Western hemisphere. It was created in 1856 and is awarded for valour in the face of the enemy for the British Armed Forces and those of the Commonwealth, although most nations now have their own. The vignettes depicted in the citations for this award are dramatic and nigh-impossible sounding, which is probably why such a high percentage of them are awarded posthumously.

The U.S. Congressional Medal of Honor has been around almost as long, but has been awarded 3,520 times, compared to a mere 1,358 for the Victoria Cross. In addition, the VC has only been bestowed 15 times since World War II, and not to a civilian since 1879. Legend has it that the original metal for the Cross came from cannons seized at Sevastopol during the Crimean War, but a metallurgist has determined the brass to be from Chinese guns instead, hinting at a story yet to be told.

The VC's rarity and the exceptionalism behind it make it one of the most intriguing and sought-after decorations in the world. And I got to touch one the other day. 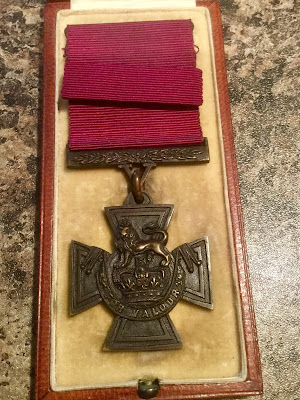 Our good friend Peter gave Audrey, Glory and I the opportunity to view it a week ago, the day before he and it flew to Ottawa so this august decoration can take its place in the Canadian War Museum. 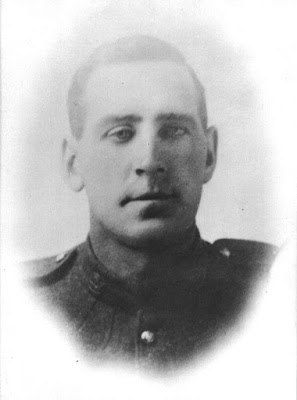 It came to Peter by way of his mother, and to her from her uncle, James Peter Robertson. He is Peter's namesake, having preferred his middle name. Born in Nova Scotia, Robertson moved to Medicine Hat at a young age where he lived with his mother until he joined the Canadian Expeditionary Force in June of 1915. His papers tell us he was 6'1" tall, with dark brown hair and blue eyes, and had been employed as a locomotive engineer. 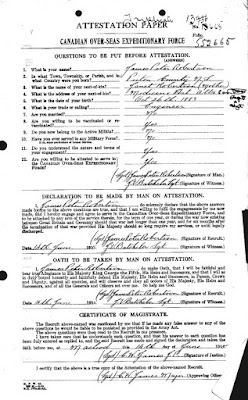 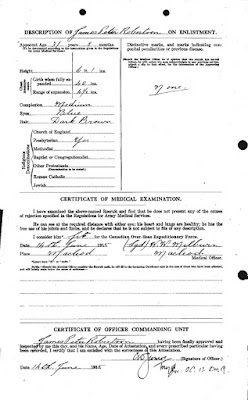 Two years later, he was dead in Passchendaele. On his last day on Earth, Robertson distinguished himself under fire on two separate occasions. His Victoria Cross citation tells the tale: 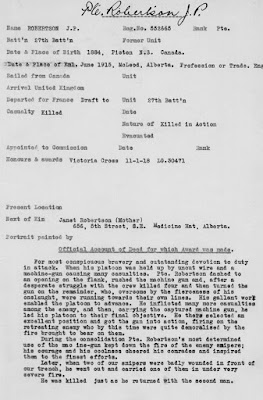 For most conspicuous bravery and outstanding devotion to duty in attack. When his platoon was held up by uncut wire and a machine gun causing many casualties, Pte. Robertson dashed to an opening on the flank, rushed the machine gun and, after a desperate struggle with the crew, killed four and then turned the gun on the remainder, who, overcome by the fierceness of his onslaught, were running towards their own lines. His gallant work enabled the platoon to advance. He inflicted many more casualties among the enemy, and then carrying the captured machine gun, he led his platoon to the final objective. He there selected an excellent position and got the gun into action, firing on the retreating enemy who by this time were quite demoralised by the fire brought to bear on them.

During the consolidation Pte. Robertson’s most determined use of the machine gun kept down the fire of the enemy snipers; his courage and his coolness cheered his comrades and inspired them to the finest efforts.

Later, when two of our snipers were badly wounded in front of our trench, he went out and carried one of them in under very severe fire.

He was killed just as he returned with the second man.

The decoration has lived in a safety deposit box now for many years, with a framed replica on the wall in Pete's mum's place. Notionally it was to be handed down to male heirs or, failing that,  presented to the Canadian War Museum. As Pete is an only child with no children of his own, the decision was made to arrange the transfer now, so Mum can rest easy knowing this cherished medal has gone to the proper place. Only 99 Canadians have ever been awarded the Victoria Cross, and the Museum has 39 of them - presumably, Robertson's will bring it to 40.

As such, the Cross is in spectacular condition (at least to a layman's eyes), as is the original presentation box.


The VC also came with a miniature to be worn on the ribbon bar when the Cross itself was not worn.
And lastly, the Memorial Cross GRI (Georgius Rex Imperator) presented to Robertson's mother.

Robertson's bravery and sacrifice are remembered in other ways as well. A Coast Guard Hero-class patrol vessel bears his name, and there is a marker in his honour in the Hillside Cemetery in Medicine Hat. Stories on the Imperial War Museum's Lives of the First World War web page tell of a burly giant of a man nicknamed 'Singing Pete' whose unit mutinied in Medicine Hat due to a delay in getting them into action, and who got into a fistfight with a civilian over their inaction as well. 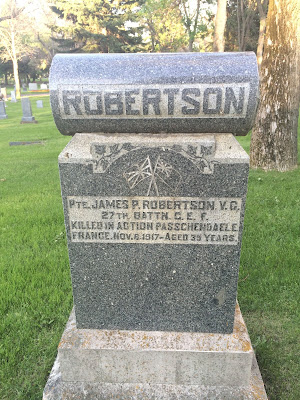 If you should travel to Belgium, Pte. James Peter Robertson's remains are interred at the Tyne Cot cemetery there, along with so many other Canadian and Allied soldiers who made the ultimate sacrifice in the so-called "war to end all wars." 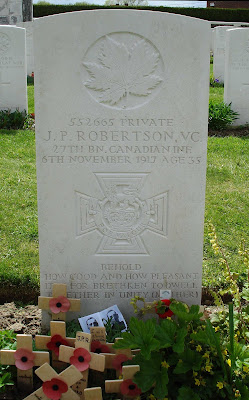 After two generations in the hands of a grateful family, this particular Victoria Cross now moves to a public institution, which is perhaps how it should be. Now even more people can see it, appreciate it, and hear the harrowing tale of how it was earned, as well as the cruel irony of how the recipient died - not while taking lives, but saving them. 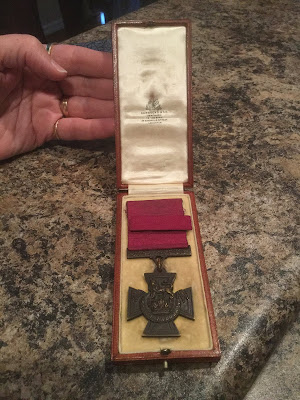 What a privilege to have been accorded a personal encounter with such a piece of significant and moving history! Thank you, Pete.
Posted by Stephen Fitzpatrick at 9:18 PM