A Nerd Among Nerds

The line between pop culture and the mainstream gets blurrier every year, it seems. Where adult consumers of science-fiction and comic books and the like once had to indulge those interests among like-minded friends or through small-scale media like fanzines, now an event like the Edmonton Expo can attract tens of thousands of attendees from within a city considered by many to be the redneck capital of Canada.

I was nowhere near the oldest attendee, and there were lots of parents there with their children, often all kitted out in some form of costume, or at least sporting t-shirts displaying where their specific fandom lay. Attending sci-fi cons in the '90s, a significant number of the females attending (but nowhere near all!) were wives and girlfriends of a more interested fellow, but now fangirls of all ages are enjoying themselves and proudly identifying as part of the subculture.

There are probably as many reasons for attending these events as there are people; some are there to show off their costuming skills, others are there to buy collectible movies or art, and still others are there to rub elbows with celebrities from television, movies and animation. And it was quite a crowd for our little self-deprecating burg; Dwight Schultz and Dirk Benedict from The A Team (yes, and Star Trek and Battlestar Galactica), Mads Mikkelsen from Hannibal (and Casino Royale), Simon Helberg and Kunal Nayyar from Big Bang Theory, Summer Glau from Firefly and Arrow, Alice Cooper, and more.

Me? Strangely enough, I was mostly there to hear the mayor.

Edmonton Mayor Don Iveson was scheduled to give a talk on cities of the future; I thought it was cool that the Edmonton Expo organizers thought to invite him, and even cooler that he agreed to come.

Having read his blog and listened to him campaign, I knew Mayor Iveson to be a thoughtful and insightful individual, and that he has a reputation as a bit of a nerd in a political sense, what you might call a 'policy wonk'. Turns out he is a nerd of many colours.

There was a bit of a delay at the beginning of his presentation as the a/v crew struggled to bring a slideshow up on the screen that was inititially intended to magnify his image for those in the back of the room. Instead of looking uncomfortable, he asked a cosplayer dressed as Wolverine in the front row to stand up and said to the crowd, "Maybe we can get this guy to be our Wolverine statue, what do you think?", alluding to the recent petition. There were some good-hearted cheers from the audience, and then he stood for a few pictures with the ersatz Weapon X.

Once onstage, there was some trouble with the mics, and he said, "That's just as well, it gives me some time to do this..." and proceeded to hang his suit jacket on the back of this chair. Then he took off his tie, and I thought, 'Man, this smacks of image management; I hope he is not going to some contrived effort to look more casual and approachable or something...'

And then he started unbuttoning his shirt. 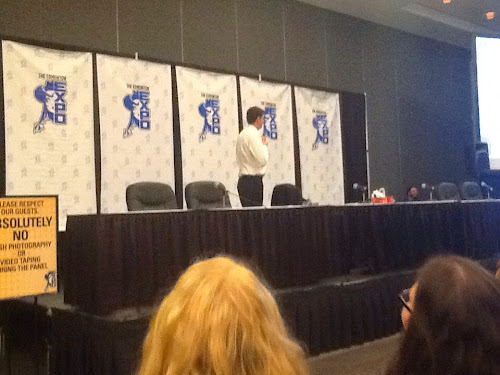 This prompted a few cheers and whistles from the crowd, so he demurely turned his back while he finished removing his dress shirt, and then turned around to reveal a classic gold Star Trek captain's tunic. 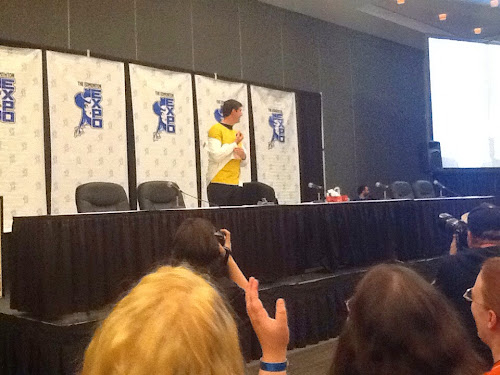 This was immensely well received, and while the techs finished getting his mics prepped, he asked of the crowd, "Star Trek? Or Star Wars?" It started out evenly, but I think Star Trek edged out in the end.

The mayor made a point of explaining that the delay was entirely his fault and not due to the 'redshirts' backstage, as they had not known he was bringing a slides how and were hard at work making it work. Any show of humility like that will always go a long way with me, and doubly so with an elected official. Plus I thought referring to them as redshirts was delightful.

Once he got underway, Mayor Iveson spoke for about 30 minutes about what steps the city of Edmonton was taking in terms of preparing for the future, the challenges yet to come, and where we might eventually go. He started out talking about the importance of mass transit, not just from an environmental sense, but a sociological one, citing the fact that twenty years ago, 90% of all 18 year olds had their driver's license, but now it was closer to 70%.

He talked about the infrastructure needed to protect us from the effects of climate change, and the fact that in the last decade or so Edmonton has had not one but three storms in the 'once in two-hundred years' category, but that the category itself has changed, going from two inches of rain within 24 hours fifty years ago to two-and-a-half inches now, and how all our drains and sewers were built for the former, but now have to accommodate the latter.

Points were also made about the environmental impacts of various initiatives, like the new biofuel plant soon to come onstream, and the opportunity to move waste and rain water with natural looking retention ponds and medians with rocks and plant matter that look like ditches, but are called 'bio berms' because it sounds better.

All the while he spoke, he engaged the crowd, rarely referring to his notes, and peppering legit sci-fi references into his presentation. Showing the four globes needed to sustain our planet if everyone on earth lived the way we do in Edmonton, he quipped, "There are four lights...anyone?" before moving on.

It was an impressive presentation, and not just because Don Iveson is a wicked smart guy (though he is), or because he is a fanboy like so many of us; a number of things struck me as he spoke.

The first was his earnestness, sharing his fascination with trains, not just because of their role as 'energy agnostic pedestrian accelerators', but because he likes to ride them with his son, because trains are cool. How he considers himself lucky to be allowed to weigh in on complicated and important matters as part of his job.

Second was his compassion. One of the reasons he takes the train to work is because everyone takes the train, and this not only gives him a chance to talk to everyday Edmontonians about what bothers them and makes them happy, but also to see the people on the margins, and recognize that any meaningful future has to accommodate them as well.

Next was his ability to see the big picture, looking at issues of urban sprawl not just from the point of view of how difficult it can be to string transit and utilities to outlying areas, but also about impacts on neighbouring communities and the watershed, and how our choices now will affect future generations of homeowners and renters. Looking at transit, he thinks LRT is important, but is grateful and proud to have Edmontonians working on a versatile maglev system with robotic cars coupling and uncoupling as needed.

Lastly was his sincerity; Mayor Iveson was not at the Edmonton Expo to dress like a fanboy, he clearly is one. He used a comparison between Star Trek: The Next Generation and Elysium to contrast two diametrically opposed visions of the future: one of scarcity and the other of abundance. He also made it clear that he thinks the latter is more probable, because he fundamentally believes that people are good (and backs that up with his personal experience of having knocked on about 25,000 doors!), but also fears that a dystopia could be our fate due to circumstances beyond our control; a cautious sort of optimism. 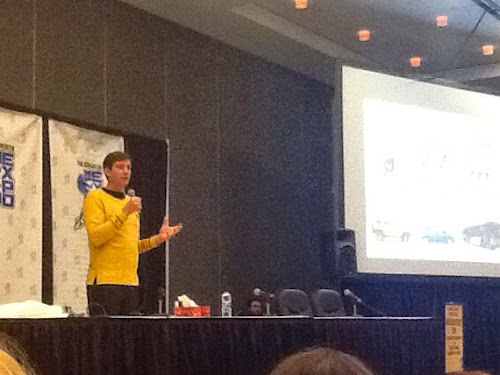 In the end he came back to the question of Star Wars versus Star Trek, saying that he always felt that Star Wars is about charismatic individuals sticking it to the man: Han Solo is basically the Marlboro Man, Luke is Paul Revere, Obi Wan is Thomas Jefferson and Yoda is Benjamin Franklin, while the Emperor is essentially the King of England. The whole thing starts to take on a Revolutionary War narrative, and there is nothing wrong with the colonies standing up for themselves, but in comparison, he feels Star Trek is about groups of different people coming together to make things better for everyone. And when they've made sure that everyone at home is taken care of, they start exploring, and, guided by the Prime Directive, they try to help other to figure this out as well.

The Journal gave some nice coverage to his presentation here, and I hope the Expo organizers put it online at some point, as I would love to share it with some people, and wouldn't mind seeing it again for myself. Having been there though, I came away hopeful for the potential future some of our elected leaders see for the city I live in, grateful that talented and passionate people like Don Iveson (and a lot of others on council) choose an often thankless career in public service, and smugly pleased that so many nerds turned up to hear one of their own to talk about the future.

Plus it is refreshing to no longer feel so jealous of Calgary and their cool mayor; we have our own, and he is one of us.

Posted with Blogsy
Posted by Stephen Fitzpatrick at 8:49 PM