At long last, the final group of regular Valhallan infantry are completed; for the time being at least, I have painted my last greatcoat.  (Can I get an 'amen!'?)  71 of them, all told.  I'll be quite happy to not paint another one for some time now, I would imagine.  Hopefully these don't look any more rushed than the rest of the army, but regardless, they are my favourite colour: done. 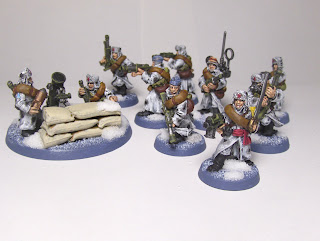 "E" Squad is the only squad with a mortar in it, and since I actually purchased the army back in 2007, I am not entirely sure why that is.  It certainly isn't because of any shortcomings of the model, which is fine.  Perhaps I figured the barrage capability of my armoured contingent was sufficient.  Regardless, I am glad I have at least one for variety's sake if not tactical flexibility. 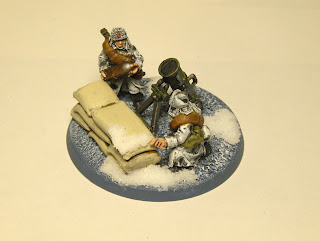 The mortar team leaves a lot of open base to be covered, so the sandbag emplacement seemed like a good fit.  With a little better placement, I might have been able to put a wall on two or even three sides of the team.  On the other, since each of the half-bags needs to be puttied up (as they are hollow), maybe it's for the best that I didn't. 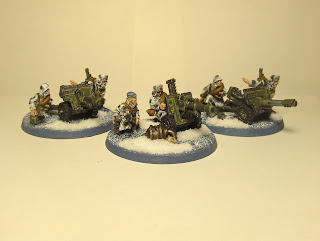 The final unit is "H" Squad, the platoon's sole heavy weapons squad.  I envision placing them on the high ground in an anti-vehicle role, which their two lascannons and lone autocannon seem well suited for, since that gives them two Strength 7 and two Strength 9 shots, and a reach of four feet. 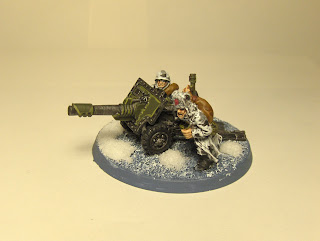 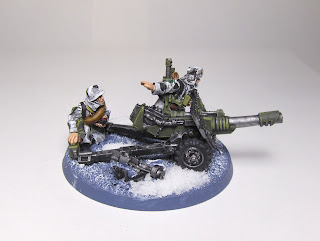 I think the Perry Twins did a magnificent job with these Valhallan sculpts that are about 15 years old now, and the heavy weapon teams really showcase their historical research and attention to detail.  The lascannon spotter has a pair of binoculars, and his pose reads like a speech bubble of "Wait for it..."  The loader has a spare battery or capacitor of some sort in addition to my favourite feature: the little black box with the big red button for fire control. 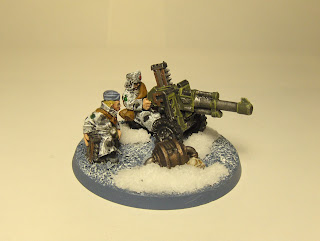 The loader with a jumbo-sized clip of autocannon ammo is similarly well thought out, resting a heavy box of shells against his leg as he kneels and waits for the order to reload.

I'm very glad I did these 16 models in a single batch; it got a little tedious, but enabled me to finish them swiftly.  Now that I am back at work on a large plastic model for the first time this year, yesterday's ennui is today's passion for painting.

So long as it doesn't involve greatcoats.
Posted by Stephen Fitzpatrick at 7:52 PM