So here's the thing: you're feeling like a dip in the hot springs whilst the spawn are out of school, but Miette is closed for the season and Banff is crowded even when Parks Canada isn't giving away free passes for the sesquicentennial, so despite the risk of the adventurous becoming rote we returned like spawning salmon to Radium Hot Springs. Should we come back yet again at this time of year, I am listing the following reminders about the place for myself, and posting them publicly in the hope that others may find them useful, or at least distracting.

The drive from home to Radium is 8 hours via the Icefields Parkway, not 6.
Damned if I know how I got that mixed up, but it meant a speedy peregrination through the passes in order to get to the aquacourt before closing time, let me tell you. Not so much that we couldn't stop for a selfie at a scenic viewpoint though. 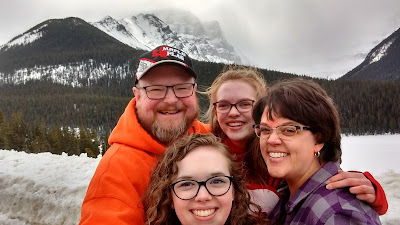 A soak in the hot springs with your family is an ideal way to unwind after a long drive.
Seriously, if not for the pruning I would be there still. 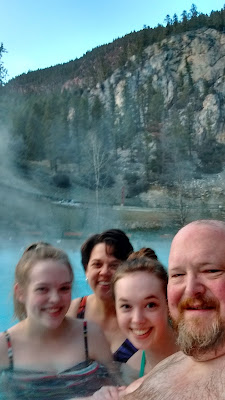 Entering into a semiconscious state while floating may result in your facial hair getting braided, unbeknownst to you.
Between the high concentrations of minerals in the spring water and the fact that my body is probably 30% lipids, buoyancy comes easily to me and I have often wondered if it might be possible for me to actually enter an alpha state of light sleep while floating on my back. Attempts to determine this are usually undermined by the aforementioned spawn doing something they find amusing, whether it is turning me over in the water and comparing me to a deep-fried Dutch confection called ollie bollen or attempting to style my chest or facial hair, and then photographing same. 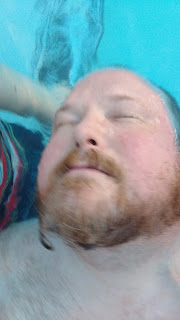 Horsethief Creek Pub And Eatery stops serving minors at 8:30.
Arriving in Radium at about 7:00, we decided to get in a dip before heading out to dinner, and having given up red meat for Lent, I was (surprisingly) really looking forward to their veggie burger, a hearty patty made out of spinach and egg, but when they asked if our girls were of age, we were foolishly honest and ended up getting takeout pizza from across the highway instead. The silver lining? Wildside Pizza was really good, and they had one of those F'real milkshake machines what let you set the thickness of your beverage (which facilitates the adding of potables one may have brought for such an occasion, such as a delightful toffee whiskey), and of which we availed ourselves the following evening.

There's more than one way to dry a swimsuit.

There is a lovely walking trail alongside Sinclair Creek.
The lady at the liquor store suggested we take walk this way now that it was finally dry enough, and it is lovely. We drove down past the sawmill because I was simply not up to the elevation changes inherent to the other route, and enjoyed about an hour-and-a-half''s worth of creekside stroll full of educational tidbits provided by the guidepost mascot, Alvin the alevin (the larval form of the kokanee salmon. 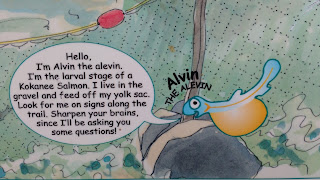 In addition to the fresh air, exercise and gorgeous scenery, it was worth it just to able to introduce the expression 'yolk sac' into the family lexicon. 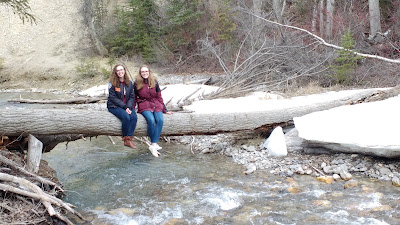 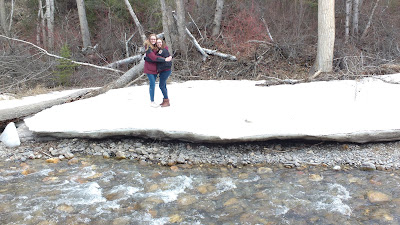 I'm still astonished at how well these two girls get along. 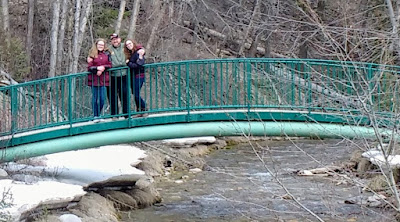 I also appreciate how Google artists up my snapshots every once in a while, although it is maybe a little unsettling to boot. 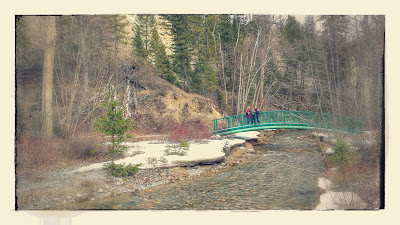 'Escape terrain' is a term used to describe geographical or topographical features used to evade predators.
I've done this for years in video games, and finally have a name for it. In this case however, it refers to the hoodoos used by mountain goats and sheep to stay out of the reach of cougars and coyotes. 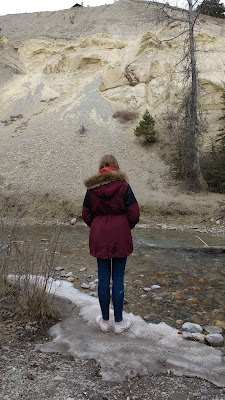 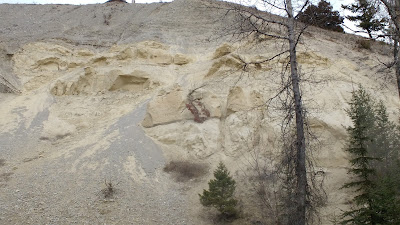 Bighorn sheep are impressive despite their ubiquity.
It took us a while to see the first few, but then it seemed like there was a herd to be spotted fairly regularly. 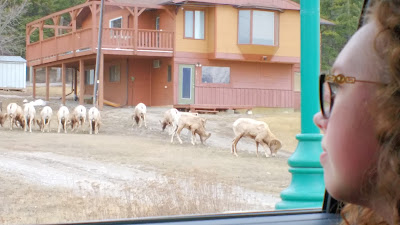 They are gorgeous and inspiring animals, and their bearing is difficult to articulate, never mind duplicate. 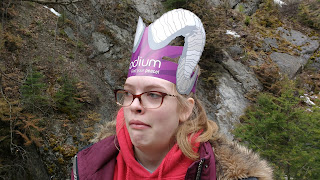 Old-timey cutout photos can still be fun.
I shared this one of the girls on Instagram with a caption about "Kids sometimes get your goat." 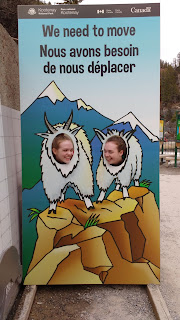 And although Audrey was purportedly amused about my referring to her as a cougar, it turns out that jokes about underpassing were out of bounds. 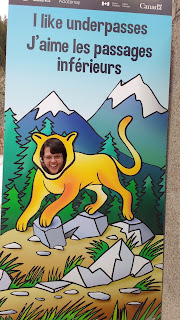 She's a good sport though.

For a small town, one can eat damned well in Radium.
There are two German restaurants (one we dined at last year, and other we will try out when we return to the area for camping in August), a Hungarian diner, a first-rate coffee shop, an English pub I have yet to try, and my favourite, the Fired Burgers and Breakfast Place (F'd Up BBP for short). The two best examples from this go-round were Glory's banana-stuffed French toast... 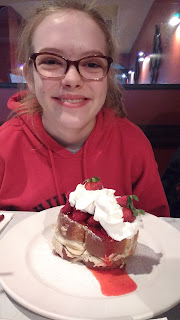 ...and my Monte Cristo Eggs Benny. 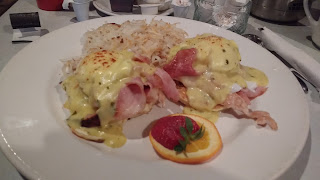 It's not quite OEB, but that place is just too far from here, and Fired Up has less of a line up, at least this time of year.

Sinclair Canyon is amazing.
It's like this mythical stone gateway to a valley of wonderment; I can only imagine what it must have felt like passing through here in the cowboy days. 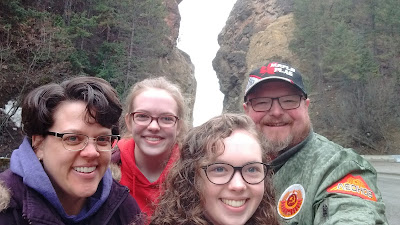 The iPad is the second best thing to bring on a road trip, after one's family.
Having driven the whole way out and through the Icefields Parkway during a winter storm on the return leg, I felt entitled to decamp to the back seat with Glory and watch Captain America: Civil War on the iPad during the less-than-riveting Hinton to Edmonton portion of the journey. 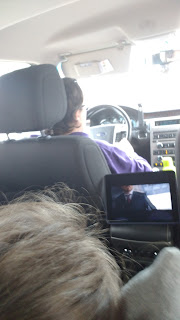 There's a lot worse ways to close out a three-day mini-vacay than that, I can assure you.
Posted by Stephen Fitzpatrick at 11:00 PM