Dinner At The Final Frontier 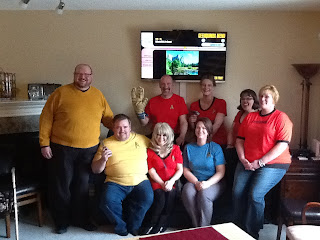 Stardate 130406.6: We arrived at the planet Harris VIII in time for the seasonal observance of Geekquinox. While many of the male crewmen opted for casual dress, the women maintained a strong Federation presence in their Starfleet regalia, which was both unanticipated and delightful.  The nostalgic hairdos sported by some of the ladies were also extremely well received! 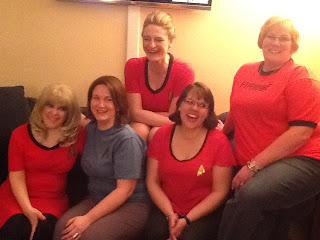 Our host, Peter, had prepared a sumptuous repast of a number of courses and beverages, all strongly themed to our starfaring proclivities.  As he was kept busy with his preparations, his main viewer outlined what we could expect as the evening progressed. 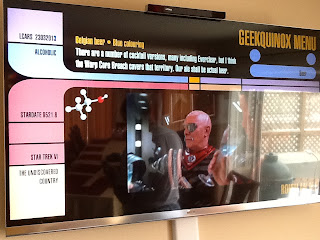 The question was raised, however, as to which was more telling: the fact that our host had meticulously researched the appropriate stardates for the menu display, or the fact that one noted officer was able to confirm them with but a glance. 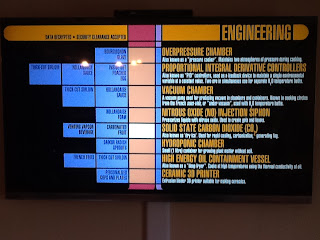 As the LCARS display indicates, there was a significant Engineering component involved in the preparation of many of the dishes, such as the heart of targ, prepared using a 'modernist' technique dating back to the early 21st century known as sous vide.  Leaving nothing to chance, computerized PID systems were used to maintain a stable temperature of the fluids used to cook the vacuum-packed meat.  Unconventional as it was to most of us, there was no denying how delicious an entree it resulted in. 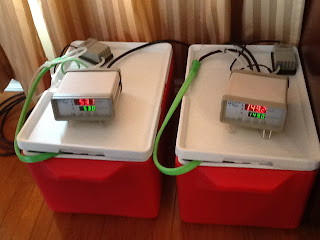 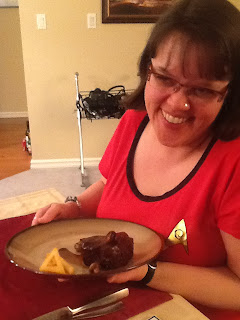 It should be noted that the tetrahedral potato accompaniments were hand-carved by the host, which caused one observer to suggest that Garth of Izar may no longer be the benchmark for insanity amongst fleet officers, but all in good sport. 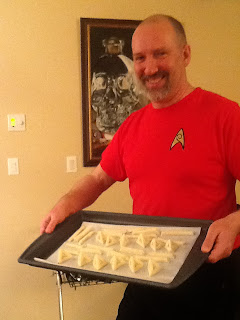 The sous vide technique also enabled Peter to produce a delightfully inside-out version of Eggs Benedict he playfully referred to as the 'Transporter Accident'. 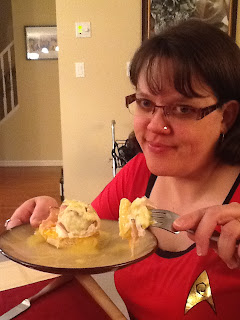 Peter's commitment to presentation extended beyond the menus and even into the way some of the appetizers were served:

Another unconventional aspect was a seafood appetizer served in a single-serving drinking vessel; the Gorn Gunpowder Shot (known in other regions as a hamachi shot) melded a fascinating combination of exotic ingredients, including hydroponically grown sprouts the host had cultivated himself. These were muddled together with a small amount of ponzu sauce before being 'shot' back, and produced an intense array of flavours and textures that saw everyone who sampled it return for another serving, even those with historically timid palates. 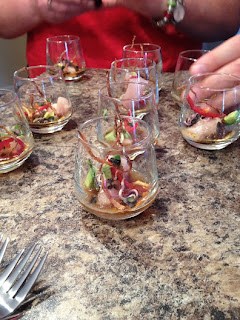 It is said that only the bravest venture into Vulcan cuisine, but his interpretation of Vulcan plomeek soup was virtually indistinguishable from the real thing. 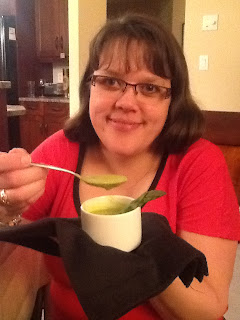 The Smorgas-'Borg' cubes of risotto accompanied by tasty duck were another triumph of taste and presentation. 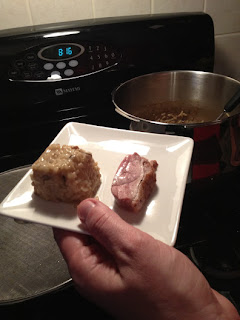 In terms of libations, being outside the territorial borders of the Federation proper allowed us to imbibe of the fabled Romulan ale (or perhaps a less potent derivation, according to one individual who claimed to have sampled it before), but a far more exotic treat was the Warp Core Breach, derived from a Ferengi recipe. 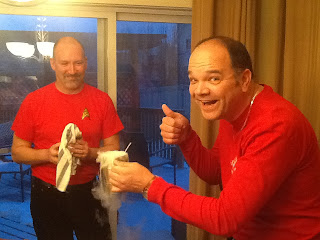 The Warp Core Breach boasted a tremendous presentation, bubbling and steaming in its insulated container, but as advertised, it was capable of inducing three day's relaxation, due largely to the high concentration of Terrestrial rums.  The solid carbon dioxide which served to keep the beverage refreshingly chilled also necessitated its being drunk through a device similar in construction to the South American yerba maté straw, for safety.

It wouldn't be a Starfleet operation without some sort of anomaly cropping up, however, and due to a fissure in the spacetime continuum or perhaps a temporal flux in the reflex-schedule capacitators, the Food Cubes failed to materialize in time for dinner.   They were still amazing looking though, and tasted delightful the following day. 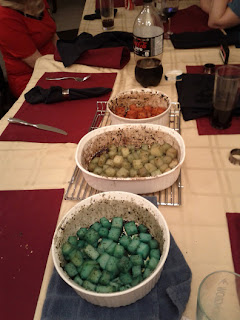 Better still than the food was the spirit of conviviality and fellowship that pervaded the evening's observances, which went on until the wee hours.  Our various missions and deployments give us far too few opportunities to enjoy each other's company, so we were all grateful to Peter and the hospitality of Harris VIII for this chance to share a wonderful time together, as well as an opportunity to dine where no one has dined before! 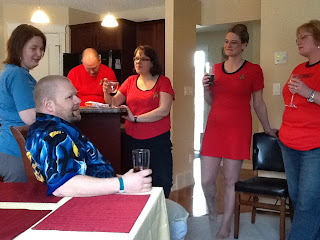 Posted by Stephen Fitzpatrick at 7:47 PM