This is a somewhat unforgiving scale for the painting of stripes, but by cutting caffeine out for a day, I managed to get them almost straight.  The solid colors/solid spoilers look of the plastic cars that come with Formula Dé turns out to be incredibly boring when replicated on a miniature, so I had to improvise some racing livery and stripes.

My total ignorance of the world of motorsport has probably never been more obvious than when looking at the designs I ended up with.  Some of them are kind of traditional, but I was guessing all the while. And looking at them now, I think perhaps inspired by flag day.  Go Sweden! 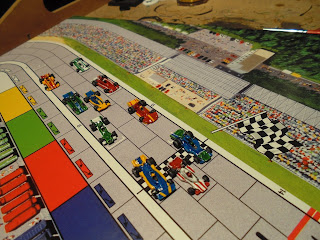 Partially by design and partially by accident, I ended up with a mirror arrangement, so the red car with the yellow spoiler complements the yellow car with the red spoiler, and so on.  Having blue and green go together wouldn't have been my first choice, but all the other colour combinations sort of led me there.  There shouldn't be any difficulty mixing the cars up, but only time will tell.

For a time, I toyed with the idea of trying to sneak a superhero logo on the the appropriate colour scheme, like a Flash lightning bolt on the red/yellow car, a Green Lantern on the green.white car, and so on.  I decided to save myself the eyestrain this time around, and perhaps save them for the '60s  cigar cars which don't have much room for stripes and the like. 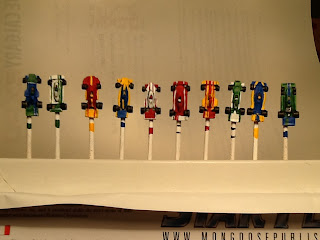 The toothpicks worked really well in terms of ease of painting, and also made varnishing much easier, since their small size made blowing them off my spray box a real possibility.  Stabbing them into a spare box lid not only prevented this, but also prevented them sticking to the box.

My original intention had been to spray the cars once with a glossy varnish ('Ardcoat) for maximum protection (they are gaming pieces, after all) and then hit them with some Testor's Dullcote for a matte finish which is typically my preference.  In the end, the shininess seemed extremely subject appropriate, so after consultation with my peers, I elected to leave it on for the time being. I did brush a little matte varnish onto the tires, since the shiny rubber was a bit offputting.

Sure enough, clipping the toothpicks off the painted and varnished cars resulting in the paint tearing off the bottom of the model in a couple of cases, but thankfully it never ripped in a visible area. 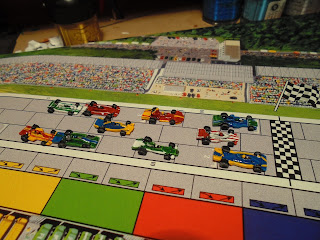 Formula Dé is a great game: easy to pick up, dynamic sequence of play (leader moves first, making passing critical), and most importantly, it supports up to ten players.  With custom cars, we now have all the more reason to play!  Too bad the additional tracks now go for up to $200 on eBay...
Posted by Stephen Fitzpatrick at 10:03 PM